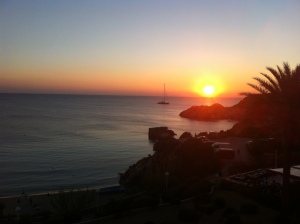 Personally 2014 has been a year full of magic…and surprises.

Last January a year ago we left Amsterdam in the morning, the house empty, the Silver Shadow full of bags and Dorus’ tools, Liefje in the back meoowing and there we went. First we drove to Ygrande (under Paris), then Barcelona and in the end Valencia where we took the ferry to Ibiza! Inspired by our friend and before it’s too late to jump in the unknown we decided to do it. Live in Ibiza. We had a plan to stay on the white island for 14 months. This sabbatical year further I look back on something sweet. I do know now that dreams will come true 🙂

If I have to describe the year 2014 in one word. I would say: Freedom.

Not sitting in an office most of the time, but being outside, walk, bike, enjoy the life on a Mediterranean island where there’s so much sun – even now-, meet new people, learn and speak a different language. Also freedom to live another life, to choose a non-traditional life style. No more careers and expectations to chase after, but rather start doing what we really love (working on that ;-). The year 2014 has given me some interesting insights. About being afraid and worrying about things: The fear is not real. I still need to remind me of that. About family and friends: It was better than ever to see them, here and back in Amsterdam, because there was real time and space for each other. About working in a Spanish-speaking environment: The lack of confidence I felt the first week, like I was 17 again (ohh terrible!). About being in the present time: the power of Now (still difficult..inclined to think too much). About more awareness of health and living green etc. Also time became my new best friend. Wow, so much time! It all feels like a blessing to experience time and freedom like that.

We started the year in Casita Verde, an ecological community.

We lived in a former call-oven/cave for two months in a community with a bunch of hippies from all over the world; the British were overpresented.

Straight from my office/desk-life, mainly in a conventional and business setting, I entered a green – ecological life without hardly any conventions and with other, mostly surprising views on our world we are living in 😉 I will never forget these months in Casita Verde. Especially the fires Dorus made in our ecological house in the evening when it was pitch dark and quite cold in the valley. The sky full of stars at night was out of this world.

Then an amazing opportunity came: a small studio for rent at sea in the South-West of the island through our Spanish friend. We still live there.

That’s our dream came true. Beach, beautiful skies, magical sunsets, the way the sunlight looks like over here… If people, especially Dutch tourists, ask me: “What are you doing on the island?”, I say – mostly with a big smile – : “I’m enjoying”.

Because that’s the only right answer to me.

No, we won’t leave this little paradise in March and return to Amsterdam. We can’t. We will stay.

Dutch writer and blogger, who previously worked as a jurist/legal counsel in the Netherlands. I chose to live my life on the sunny Balearic Islands in simplicity, with respect to our beautiful planet, together with my soulmate and our two rescued cats. EVALUNES has been created to share my writings about the things I care. I write with love. Con Amor. Always.