Hippie watching in a plastic-soup of cigarette-ends

This past week I wrote a readers-column for a Dutch newspaper called METRO. It’s a newspaper you can get for free at each trainstation across the Netherlands. I used to be a fan and loved to read it while I travelled to work each day. Something is bothering me lately and tada! this column was born. The thing is when it has enough votes the column will be published in METRO. Wouldn’t that be awesome? I decided to translate and share it on the blog as well. It has been a while since I have posted something new here anyway!

Hippie watching in a plastic-soup of cigarette-ends

I’m a happy foreigner living on the Spanish island Ibiza. For three hot summers I have seen a huge stream of tourists arriving on the popular island. It seems you only have to flip through a Dutch magazine and your eyes are being caught by the many articles written about the brand “Ibiza”. Not to mention the many Ibiza fairs – in the Netherlands! – and the newly opened club of the Dutch/Ibicencan TV-host, Yolanthe Cabau, and Dutch soccer player, Wesley Sneijder, on the beach of Cala Tarida. Of course, I definitely understand why this island appeals to many tourists. Who doesn’t love relaxing and dancing in the Spanish sun, where it smells like rosemary and the sea water is crystal blue?

“We’re going to watch hippies today, don’t we mommy?”, I heard a Dutch girl on the beach saying to her mother. I wanted to whisper in her ear that all hippies have retreated to their caves this summer, but I didn’t want to disappoint this cute little girl, so I kept my mouth shut. Sure, colorful people reside on Ibiza. They are modern hippies with sun-kissed bodies decorated with ink and their hair in dreads, but I’d rather discuss something else here.

I want to get something off my chest. Perhaps you might feel it coming. One of the most important sources of income on Ibiza is tourism. Nothing wrong with that, but it’s becoming too nasty to see how much damage tourism causes to Ibiza’s beautiful nature. Especially the empty plastic bottles that litter the beaches after a sweltering summer day. An entering wave, the sea drags the plastic in and the seawater gets polluted. That’s not all of it. The beach is being used as a huge ashtray where thousands of cigarette-ends disappear. Or what about straws?! The rippling sea water seems to welcome it all. The animals that live here don’t survive in this plastic soup. One and only cause of this disaster: the indifference of humans.

A few nights ago I was strolling on the beach to cool off and I saw a young woman smoking and when she finished, she threw her cigarette into the sea. Just like that. The sea as a major dumpsite of dirt. It sure looked as deep contempt to me. I was stunned, not a single word passed my lips. I just couldn’t believe what I just witnessed. And again I kept my mouth shut. Damn, I thought. Just open your big mouth, Eva! And believe me, I will. Please respect and cherish the sea when you visit her, on Ibiza or wherever. The sea houses both life and death. Do you really think plastic and cigarette-ends should belong here?

If you like my column, please give it a vote via this link:

The more votes, the bigger the chance to have it published.

Many thanks for your support!!! 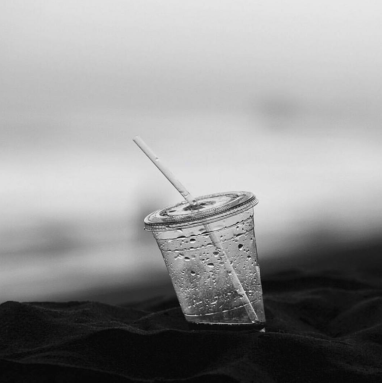 “Plastic is usually made of a combination of petroleum-derived products and other chemicals and is a man-made artificial element unknown to nature. The enzymes and micro organisms responsible for breaking down organic materials don’t recognize it. Plastic breaks down in ocean water but do not degrade entirely. Instead, they disperse throughout the water column and attract other oily toxic materials, while breaking down into smaller and smaller pieces. Plankton, the smallest creature in the food web, ingest the smallest of these plastic particles, and are then eaten by fish and carried up the food chain to humans.”  Text and photos: Oceanic Global

* The column was published in METRO the 29th of August! Thank you for voting!